From Any Point of View 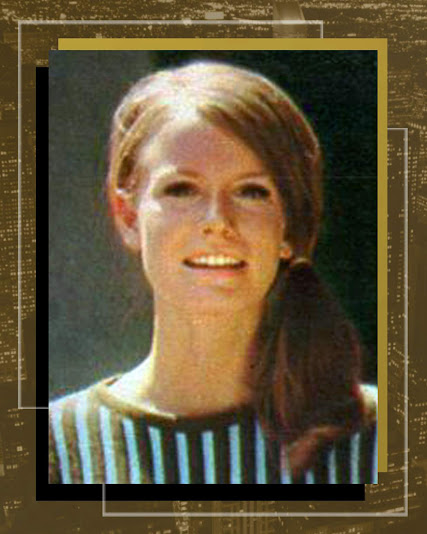 a closeup of Shelley from an ad
for Shire-Tex by Davenshire, 1966

Shelley appeared in many ads during her tenure as Supermodel. In 1966, she appeared in an ad for Shire-Tex by Davenshire. The ad's tagline was "From any point of view... switched on holiday looks by Davenshire." In the ad, Shelley wore the Newly Belted Hip Hugger in a weave of wool and nylon with a bonded lining in loden. With it, she wore the In-or-Out vertical-striped Sweater in loden and powder blue. Matching loafers and a matching belt finished her look. And Shelley looked fresh and up-to-the-minute. 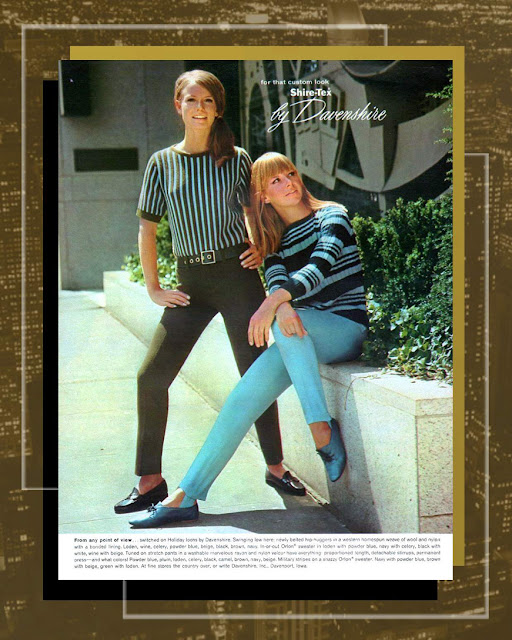 New Actress on the Scene 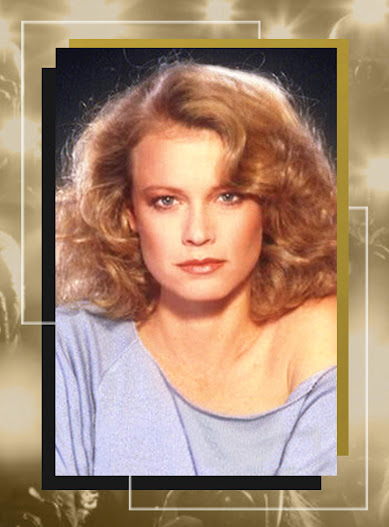 a closeup of Shelley from a promo pic from 1978

Shelley was considered one of the hottest new actresses on the scene in 1978. By that time, she was already a highly-paid Supermodel and was recognized around the world as The Charlie Girl. In the previous year, she had done a very memorable cameo in the Woody Allen film Annie Hall. By 1978, she was being considered for the Bond film Moonraker and by mid-year had appeared in her first leading-lady role in the film If Ever I See You Again. In 1979, she guest-starred in the TV series Married: The First Year and had completed the teleflick Death Car on the Freeway to be aired that fall. By mid-year, she was cast as Tiffany Welles in the mega-hit TV series Charlie's Angels and the rest is history. 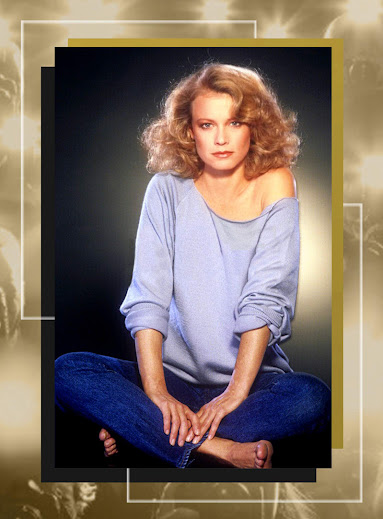 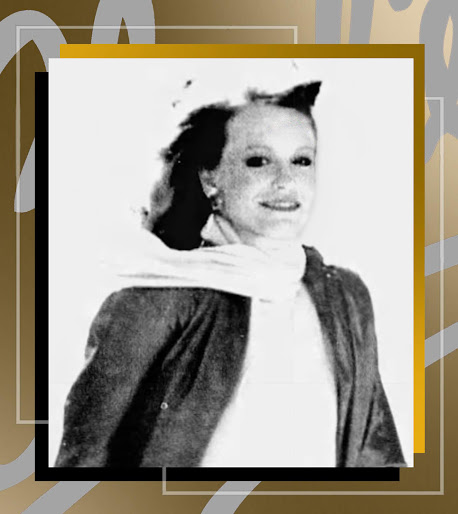 a closeup of Shelley from a newspaper ad
for Charlie perfume, 1982

Shelley was THE quintessential Charlie Girl and appeared in many, many ads for the brand. In 1982, she appeared in a newspaper ad for Charlie called the "Charlie Express Sweepstakes" which was a promo tie-up with American Express. All anyone had to do was fill out an entry form at any Charlie counter to get a chance to win a fabulous 15-day trip for two to a faraway place of their choice along with "Mad Money" for their whims and fantasies. The promo also offered customers a chance to purchase the "Charlie Steamer Trunk," which included six shadows, two blushes, two lipsticks, two lipglosses, one double-tip eye-shadow applicator and one split of Charlie cologne in a 6 oz. champagne bottle... for only $10.00 with any $5.00 Charlie purchase. And Shelley was gorgeous in the fabulous ad. 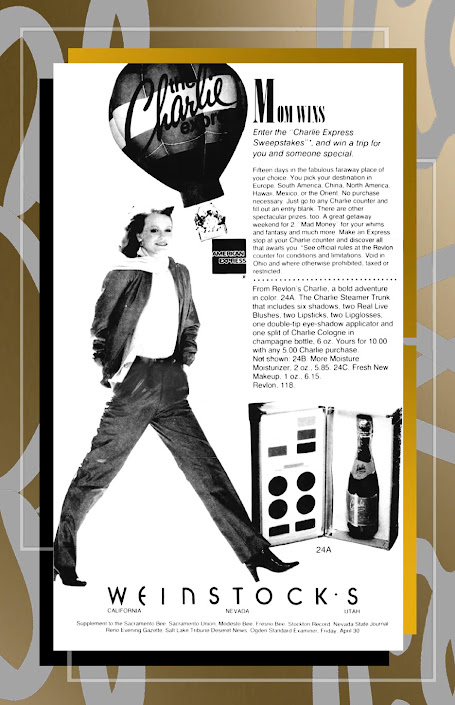 Shelley in a newspaper ad for Charlie perfume, 1982
Posted by nico at 7:05 PM 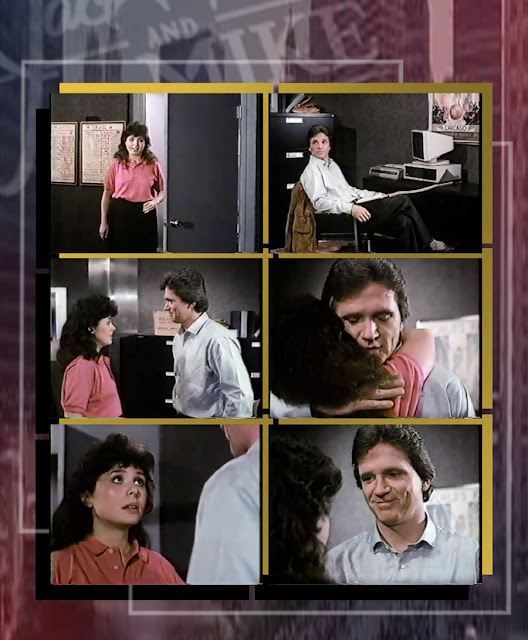 screen captures from the Jack and Mike
episode "High Anxiety," 1986

Shelley's third foray into series TV was Jack and Mike. It was about a married yuppie couple living in Chicago, trying to find time for each other in their busy schedules. Shelley played Jackie Shea, a star columnist at The Mirror, a widely-circulated Chicago paper. Her column was awaited by everyone every week. Her husband was Mike Brennan (played by Tom Mason), a successful restaurateur about to open his third restaurant. In the episode "High Anxiety," Jackie tries to steer a talented graffiti artist towards a more conventional artistic path. Also, a famed comedy team that frequents Mike's restaurant brings in so much business, as well as other things. The episode was originally aired in November 11, 1986. 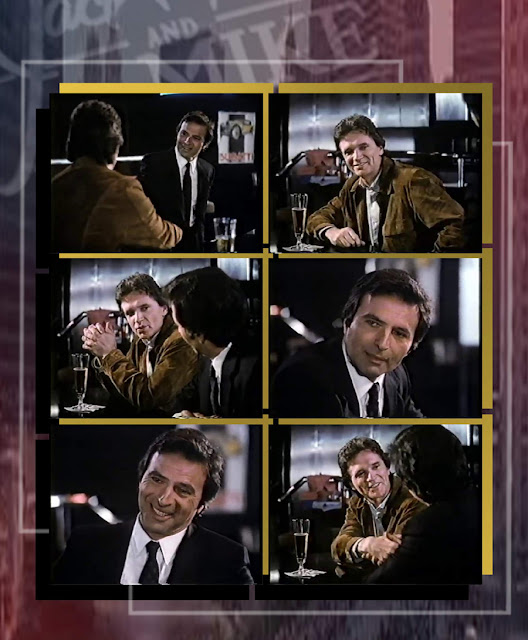 screen captures from the Jack and Mike
episode "High Anxiety," 1986
To continue, Belinda goes to see Mike in his office in 1935 to apologize for her inaction regarding Ben's addiction. She informs him that Ben's supplier is part of the restaurant's staff; and that Ben liked coming to the restaurant so he could see that person, and not to see her like she thought. Mike says Ben fooled them both and asked for the supplier's name. Belinda swears she doesn't know and Mike believes her. Later, Rick Scotti goes to 1935 to talk to Mike. Mike admits he could have easily pulled strings to keep 1935 open but that isn't the kind of person he is or wants to be. Rick assures Mike that the police will eventually find the culprit and he's sure it won't be Mike. Mike thanks him for his support. At The Mirror, Anthony tells Jackie to check the latest news wire. Jackie wonders why and Anthony tells her to read a specific wire. She reads that Ben's autopsy results will be announced at a press conference at 4 pm. Jackie gets ready to leave to go to Mike. She wants to be with him when the results are announced. She rushes out. 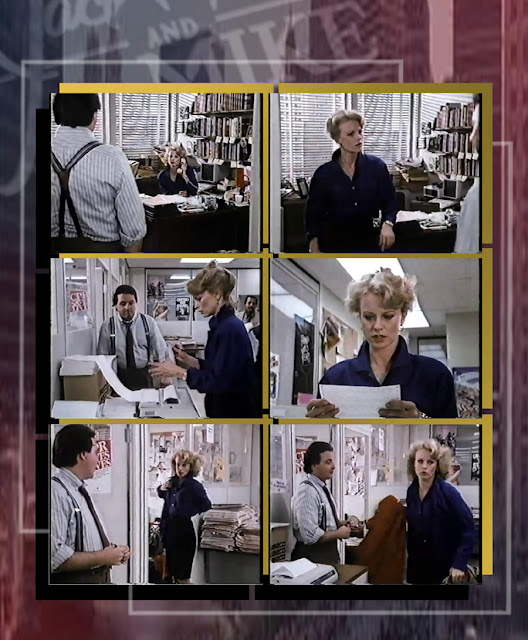 screen captures from the Jack and Mike
episode "High Anxiety," 1986
Posted by nico at 7:02 PM 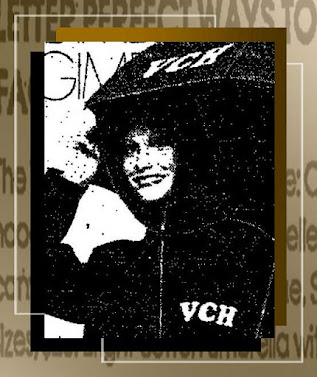 a closeup of Shelley from an ad for Gimbels East, 1975

Shelley appeared on many ads throughout her modeling career. One of them was for Gimbels East, the first department store in Manhattan's Upper East Side. With the tagline "Letter Perfect Ways to Face the Weather," in the ad, she modeled a hooded rain slicker in water-repellant canvas as well as a bright cotton umbrella with a wooden handle - both of which could be monogramed with two or three letters. And Shelley looked perfect for those rainy days. 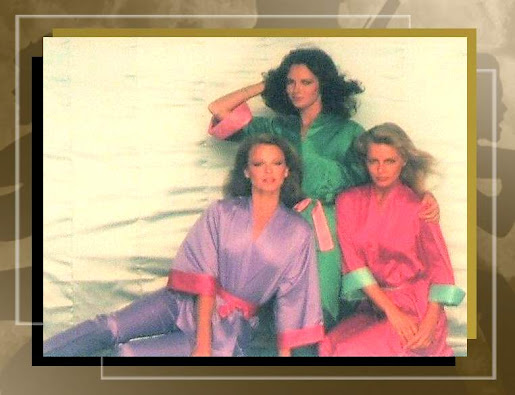 Shelley with Jaclyn Smith and Cheryl Ladd
in a rare outtake from a promo pic set
for Charlie's Angels, 1979

Shelley became Charlie's Angel no.5 in 1979. Shelley along with Jaclyn Smith and Cheryl Ladd were the newest Angel team. By then, she was already a Supermodel (one of the highest-paid Ford models in the world) and was known as THE Revlon Charlie Girl. Capitalizing on Shelley's glamorous Supermodel image, Angels executive producer Aaron Spelling proclaimed, "We’re bringing back the glamour," after Shelley's casting was finalized. The clothing budget per episode was raised to $20,000, with each Angel going through eight outfits. Charlie's new trio was molded into a glamorous-looking team. 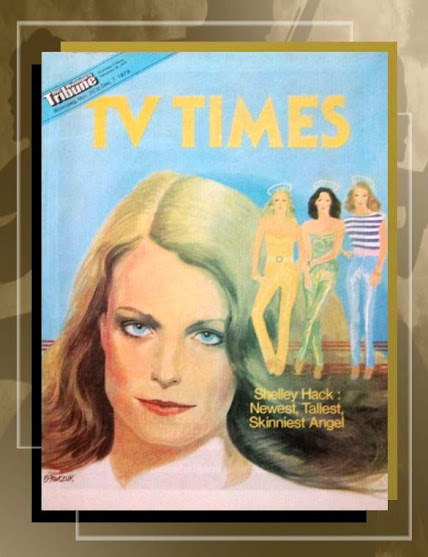 an artwork of Shelley on the cover of a 1979 TV Times magazine
Shelley was aware of the show's immense popularity. She was also aware of the kind of show it was. "Of course it's fluff," she said, "but high-grade fluff. You don't compare Agatha Christie to Tolstoy." She knew Charlie's Angels was the best there was in its category. She also knew the women who were cast as leads in the show lived in a fishbowl. She knew she had to ready herself for the publicity that came with the job, positive or negative. In 1979, upon joining the show, she told one reporter, "I had done a lot of press before (as The Charlie Girl). There was so much to do then, so you just deal with it." Later that year, she said, "I was surprised by the amount of attention." In 2000, she admitted, "I was totally unprepared for the press "bonanza" that followed." In 2002, she told E!, "I had press people crawling in my windows." As an Angel, she had entered a totally different space, the rock star space. 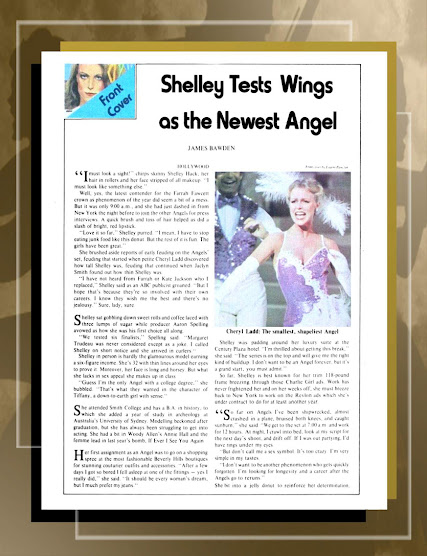 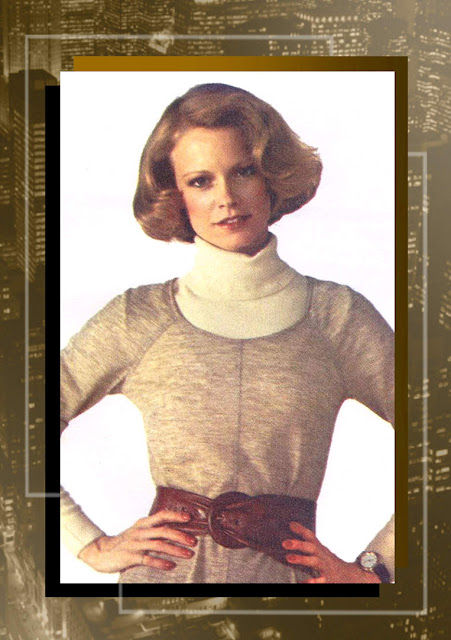 a closeup of Shelley from the package cover
of Simplicity Pattern 7655, 1976

Shelley appeared on many Simplicity pattern catalogs, brochures and packaging during the 1960s and 1970s. The Simplicity Pattern Company is the leading manufacturer of sewing patterns and sewing pattern guides which are distributed throughout the world. They have been manufacturing sewing patterns since 1927 and have allowed fashionistas on a budget and sewing aficionados to create clothes in a reliable manner. 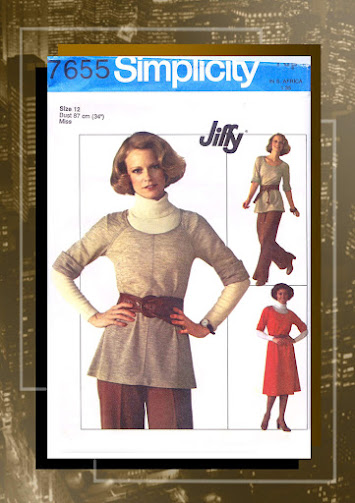 Shelley on the package cover
of Simplicity Pattern 7655, 1976
In 1976, she appeared on the cover of Simplicity Pattern package 7655. It contained patterns and instructions for creating a dress or top and pants ensemble. Shelley wore the top and pants ensemble. She wore the top-stitched scoop-necked top with back zipper and elbow length raglan sleeves and turn-back cuffs. She wore it over a pair of flared pants with back zipper and elastic waistline casing. In one version, she wore the ensemble with a long-sleeved turtleneck sweater under the top, a fancy leather belt around the waist and a matching watch. In another version, she wore the ensemble with a matching woven belt and a matching woven bracelet. And in both versions, Shelley looked utterly fabulous. 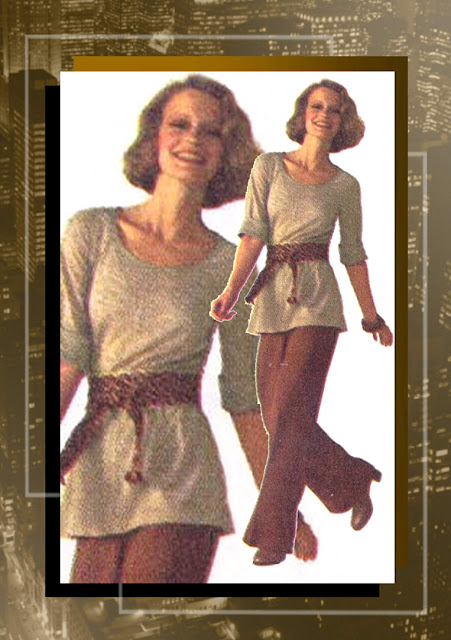 closeups of Shelley from the package cover
of Simplicity Pattern 7655, 1976
Posted by nico at 6:47 PM